The black galvanic paint appears richer and better protected by a thicker lacquer layer compared to the dials found on the Submariner 6204/6205. Under the right conditions, the original glossy sheen of the dial can remain well preserved over the decades. Although the same Radium luminous material is applied on the dial and hands, the marker at 6:00 has a lighter color than the or the Lume and glows brighter under UV light.

In addition to the case size, the shape of the  dial plate was also changed to accommodate the caliber 1030 movement. The newer dial was completely flat and had noticeable design updates. The depth rating was printed in red ink, making the Submariner 6536/8 the first "Red" Submariner. The "Submariner" model name was printed in gold paint, also atop of the lacquer layer and not stenciled in the galvanic paint layer like its predecessors.

The hands are made from a metal alloy that was gold-plated. They are also flat on top, a design that came to be known by collectors as "Gilt Hands." When the hands move about the face of the dial, the "Big Bubble" sweep-seconds hand appears to lightly graze the "Chapter" ring of the minute track. When it briefly glides over the minute hand, they are perfectly aligned.

The Submariner 6536/8 was fitted with early "Mercedes" style hands, during a period when the  hour hand was made in two sizes. The "Long Neck" hour hand was used briefly in 1954-55 on Submariner models and the shorter length that became the norm for decades to come.

Because of the smaller dial size, the Submariner 6536/8 uses the same size sweep seconds and minute hand as the Big Crown Submariners which are .5mm shorter than the other Small Crowns.

The luminous material on the dial and hands was manually applied Radium like most Small Crowns from the 1950s. Although it no longer glows in the dark, the Radium still has a distinct "speckled" glow when exposed to UV Light and has a relatively high Geiger reading as well. Please see the "Luminous" section for further information about characteristics of glow-in-the-dark materials used by Rolex.

The brass bezel once had nickel plating that has oxidized or worn away with age. The 6536/8 has a slightly bigger knurling than previous Small Crowns. The early "no-hash" inlay has a small divot to accommodate a dollop of luminous material that would typically fall away.

The case back is flat on the Submariner 6536/8, same as all subsequent Rolex Sport Models.

The Submariner 6536/8 is powered by the Rolex 1030 Caliber automatic movement.

The serial number on this example is 89,348 which was numbered after the 'reset' to 10000 that occurred after 999,999, circa 1954. The stainless steel case measures approximately 37.5mm wide sans crown, and is the same size as Big Crown Submariners. The sides have a light satin finish as well as the tops of lugs. The crown size is 6mm which is the same size as the 6205 and 6536-1. It also has the well known "+" symbol ("Swiss Made") below the crown logo. Due to the smaller dial size, the 6536/8 also uses a smaller diameter crystal than the other Small Crown Submariners. The same size crystal that fits the 6538 Big Crown, #17 fits on the Submariner 6536/8. However, the #18 crystal is specific to the Submariner 6536/8 profile. 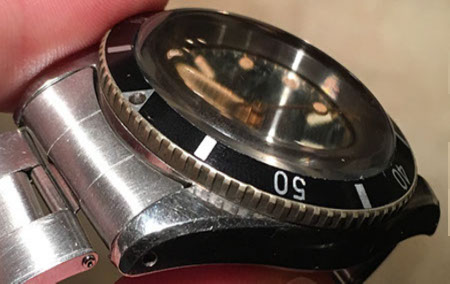 The Submariner 6536/8 was fitted with a spring loaded Swiss rivet bracelet was made for Rolex by world renowned Gay Frères. The 20mm fixed end links are typically marked "65" or "64" and the  clasp has a stamped quality control date code. 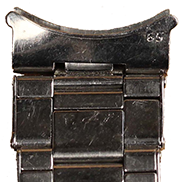