Movements that were submitted to Bureaux Suisses would be tested for timekeeping accuracy under specific temperature conditions and angles of incline. If the timekeeping accuracy fell within stipulated tolerances, the movement would receive a Chronometer certification. A more detailed explanation of the testing methods can be found online.

All Bureaux Suisses certificates have a unique number in the upper left corner. The movement number that was engraved at the Rolex factory was also noted in the upper right corner of the certificate. After certification, the movement and the certificate were then returned to the Rolex factory. In the 1950s and early 1960s, the reference number and the case number were typed on a small white rectangular sticker and affixed in the upper right corner above the movement number. Ofttimes, the case number was handwritten in the top margin using a pencil, probably to help the typist. Unfortunately, many of these stickers would come to lose their tack and fall away. By the mid 1960s, Rolex started using a perforating machine to punch the numbers instead for speed and better permanence. 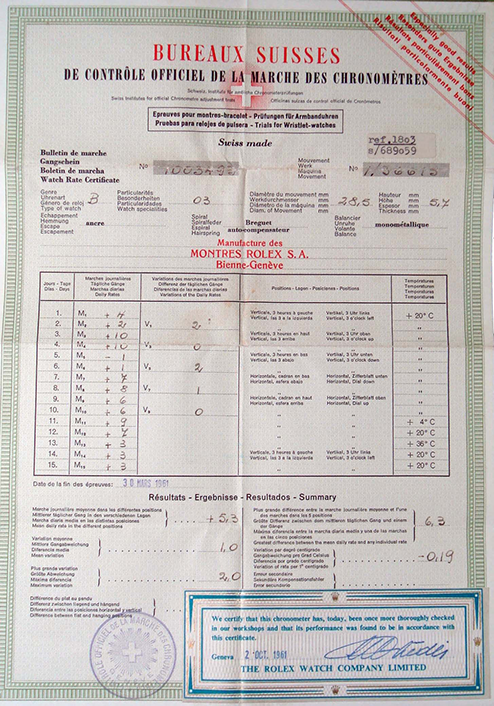 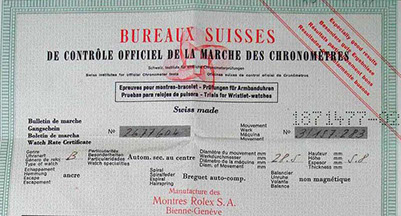 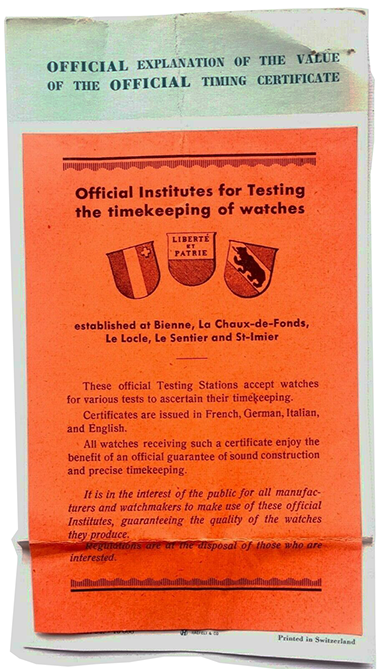 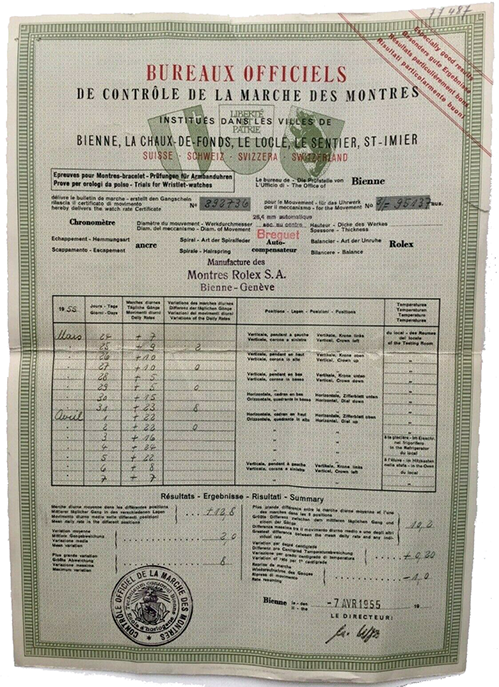 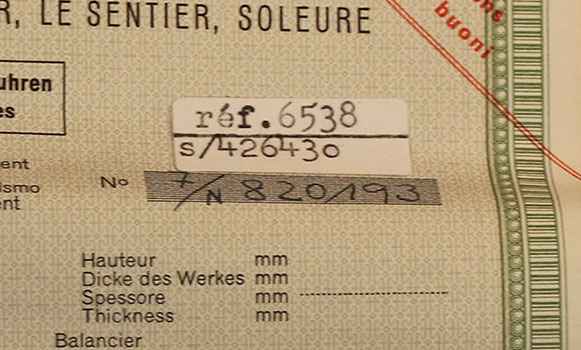 The Bureaux Suisses chronometer certificate has three important numbers in the top right corner, the Rolex Model Reference number and the Case Number, with the movement number underneath. 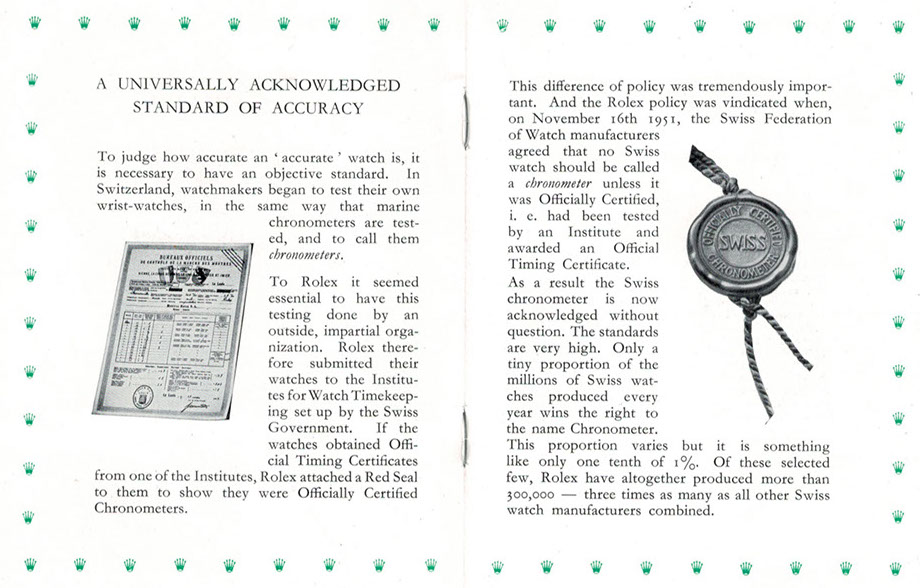 Center spread from a promotional Rolex catalog printed in 1957

When first introduced, Submariners were priced lower and considered utilitarian "Tool Watches," and therefore did not warrant the additional effort and expense of getting a Chronometer rating. Movements intended for use in Submariners were rarely submitted for Bureaux Suisses certification. The relatively few that received Chronometer certification were sold at comparatively higher prices. In order to differentiate them from their lower-cost brethren, Rolex printed "Officially Certified Chronometer" on the dial. These are also known as "OCC dials" or "Four Liners." These dial variants are quite difficult to find, but finding one accompanied by its original Chronometer certificate is that much more challenging. Becuase of their rarity, today, they command a premium to other Submariners in similar condition from the same period.

It is interesting to note that manual wind Daytona references 62xx were not Chronometer certified until the 1970s.

a feat of human engineering and a useful marketing

tool that Rolex promoted in various

and accessories to promote awareness of its Chronometer 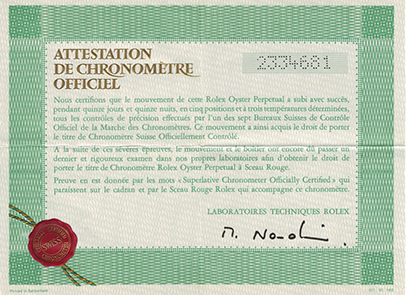 Due to the increasing number of Rolex movements that were being produced, the Bureaux Suisses certificate was replaced with Rolex's own version of the Chronometer certificate circa 1970. The newer certificates allowed Rolex greater productivity by eliminating the cumbersome older handwritten forms.

The Chronometer certificate was accompanied by a separate booklet with the owner's "Guarantee," as discussed in the Guarantees section. By the early 1970s, Rolex replaced the warranty booklets with a larger certificate that combined the "One Year Warranty" or "Garantie" with the "Official Chronometer Certification," further streamlining the paperwork for its watches. 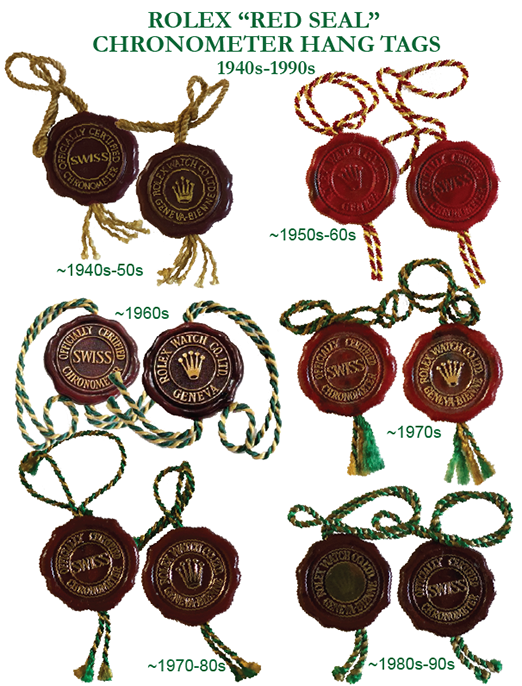 Rolex changed the wording from "OCC" to "Superlative Chronometer Officially Certified," also known as "SCOC Dials" around 1960. Some of the earliest Submariner ref. 5512 and GMT Master ref. 1675 models produced still used the "OCC" nomenclature and are very rare and prized by collectors. 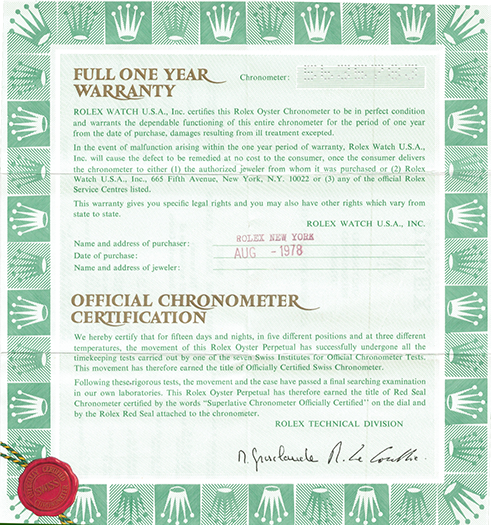