Familiarity and understanding of the various luminous material, or "Lume," types and their characteristics will enhance a serious collector's perspective and appreciation of well preserved examples. This knowledge will inevitably lead to higher quality acquisitions.

At the time Rolex started producing Small Crown Submariners and other Sport Models circa 1953, Radium was used for the luminous material on the dial and hands. The material has a distinct orange ochre color and the shape of the markers has a three dimensional appearance. They sit proudly on the dial and are rounded like half-domes and the 12:00 is pillow shaped. The Lume has a matte finish with a porous granular texture reminiscent of fine sand with small flecks of reflectivity. Their "Vintage Look" is the epitome of the vintage appearance that most watch collectors pursue.

It is not uncommon for Radium Lume to become darker, the degree to which depends on individual environmental conditions. Small black spots and and tiny flecks of dirt typically "bloom" on the markers as well as the hands.

The Radium luminous material was applied to dials and hands manually using a mixture of Radium and clear lacquer that acted as a bonding agent. As a result, no two watches are exactly alike. Quality and consistency of the Lume application varied with experience and craftsmanship levels of the individuals who carried out the work.

The lacquer component of the luminous mixture "gases out" or evaporates over time due to a normal chemical reaction caused by exposure to oxygen and humidity. The gradual disappearance of the lacquer bonding component leaves the Radium in a more vulnerable state with each passing year. Even the slightest contact with the Lume during service or strong jolt can shatter the fragile material. There is no doubt that eventually the force of gravity will cause the Lume to crumble. The good news is that it is possible to strengthen and preserve the existing Lume. However, it cannot be understated that great care must be taken and the work should be performed by a dedicated professional.

The Radium Lume has a dim but recognizable "speckled glow" when observed under a UV light. But even after extended exposure to UV or even sunlight, the luminescence disappears in complete darkness.

It is interesting to note that circa 1955, for reasons that are not entirely clear, Rolex started applying a lighter and brighter Lume at 6:00 on Submariner models. Perhaps it was done to help divers orient themselves in depths without light? Although the texture is very similar to the other markers, the greenish white color is in contrast with the rest and glows much brighter under UV. Unlike the other markers and hands, after exposure to light, the 6:00 marker dims quickly but continues to glow faintly for a time.

Radium Lume has a relatively active reading when measured with a Geriger counter, which is one of the methods collectors can use to determine if the Lume is original or has been reapplied. The measurements can vary from one Geiger manufacturer to another and are influenced by other factors such as crystal thickness, Radium mixture and storage conditions. Regardless, it is still helpful for collectors to have a Geiger counter and get familiarized with some of its readings on a variety of watches. There is additional information pertinent information in the Geiger Section. 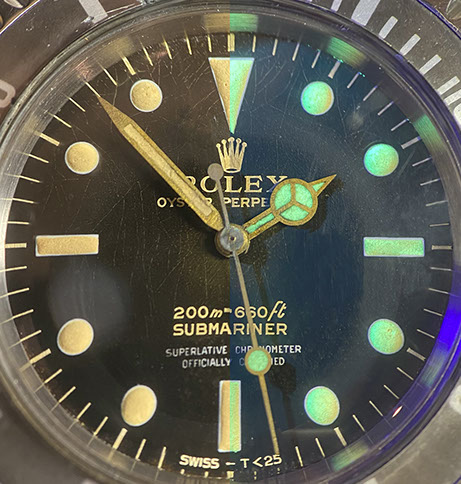 The moniker for the Lume from this period was coined dealers and collectors who wanted to describe the peculiar glow from this period. It has a distinct glow that dims quickly when the source light is withdrawn, but continues to have a faint glow for some time afterwards.

Glowie Tritium was also applied manually using the same techniques as Radium. Therefore, the Lume from this period shares many of the same characteristics as Radium. The texture and shape of the markers is very similar, as are the limitations on the quality and craftsmanship. The same type of lacquer appears to have been used during this period and the Lume has a tendency to deteriorate.

It appears that at least two colors of luminous material were used, but since the Lume had a tendency to change shade and color with oxidation it is difficult to know with certainty. A strong patina that develops can turn the markers an orange ochre color that can look virtually identical to Radium. It can be difficult to tell which Lume has been applied under normal lighting and especially from pictures. Of course, using a UV light or Geiger counter can easily confirm which material is present.

Early Tritium dials were not identified as such until about 1962 when Rolex began to add a small round Lume plot under the 6:00 marker, sometimes called "Exclamation Dial." In 1963, Rolex marked dials with Tritium using a thin silver line. These are called "Underline" dials and were only used for a limited time in 1963. There are many variations of Underline dials, both Open and Closed minute tracks. When the Swiss watch industry standardized the labeling for Tritium dials, the underline was quickly replaced with the better known “Swiss T<25” marking at 6:00.

It should be noted that Glowie Tritium watches can still have a small but perceptible Geiger reading but it is a fraction of any Radium. Please see the Geiger Experiment section for more information.

Note: Glowie Tritium was not entirely abandoned in 1968 across all model references, for example, the Daytona used the Glowie Tritium mixture well into the 1980s. 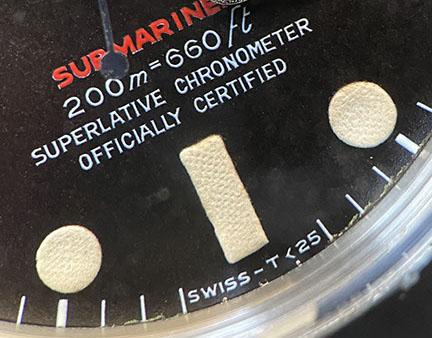 The "Dead" designation for this period comes from the lack of any response to UV light, Geiger counter, or luminescence. By the mid 1960s, Rolex was selling an increasing number of Sport Models and was working to increase manufacturing capacity, including dials. The first step in this direction was the elimination of the complex process involved with making Gilt dials by ending their production by 1966. Their successor, the Matte dial was introduced in 1967 as a replacement having fewer layers and easier to manufacture. The manual application of luminous material, another production bottleneck, was phased out by early 1968. The new application method was automated using a machine driven silk-screen printing process.

The Tritium mixture was changed from lacquer to a water based mixture to accommodate the new equipment which probably required a thinner viscosity to squeeze through the fibers of the cloth screens. The newer mixture has a smooth matte finish similar to plaster whereas the earlier Lume is more akin to fine sand. Due to this new application method, Dead Lume sits flatter on the dial than hand applied Lume which usually has a domed shape. Tiny "imperfections" in the Dead Lume can be noted on some dials. A common trait is a faint "cheesecloth" pattern that developed from the fibers of the fabric that was used in the application. Tiny air bubbles that popped during drying are also common. These characteristics can be used as "tells" that confirm the Lume is original.

The original color of the Lume was white but a yellowish patina to varying degrees can develop over time. Anecdotal evidence suggests that watches stored in darkness tended to developed a stronger patina. Watches worn on a daily basis and exposed exposed to daylight tend to have little or no patina.

Tritium luminous was eventually replaced with Luminova in 1998, and Super-Luminova a couple of years later. Both versions were used on Service replacement dials and hands. Luminova has a greenish tinge and a very dense texture akin to epoxy. It can also be recognized by its strong reaction to UV light and a lasting green glow

Unfortunately, the luminous material on many Rolex Vintage watches was poorly reapplied, or "Relumed," with newer material. It was common to replace luminous material that was damaged, discolored or lost its luminescence during service. When replacement dials and hands were no longer available or easily obtained, Rolex Service centers offered to Relume the existing dial and/or hands. Even the Rolex service department in Geneve has been known Relume watches in the past.

The replacement luminous material was usually not from the same vintage as the watch. The task would probably befall a watchmaker familiar with movement repair using a low power loupe with but with little experience applying luminous material. Most discriminating eyes and experienced collectors can easily spot a Relume and the value of these watches is greatly diminished. 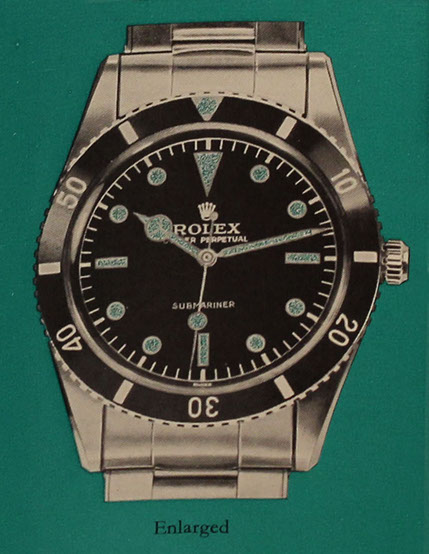 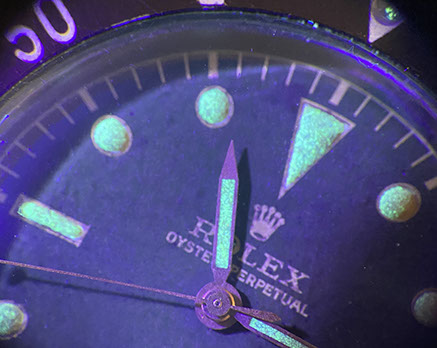 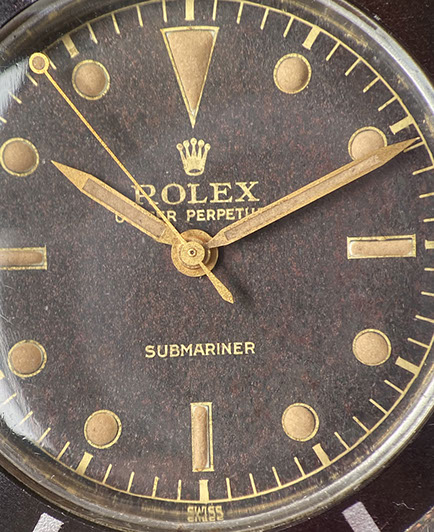 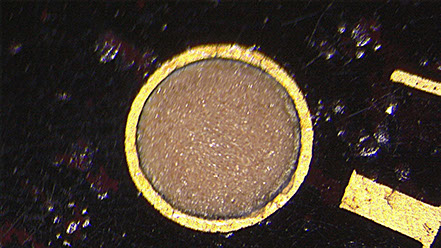 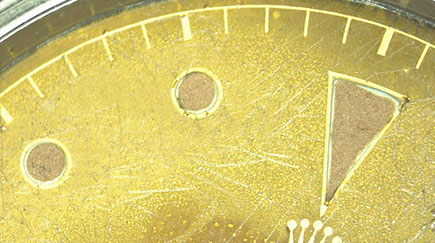 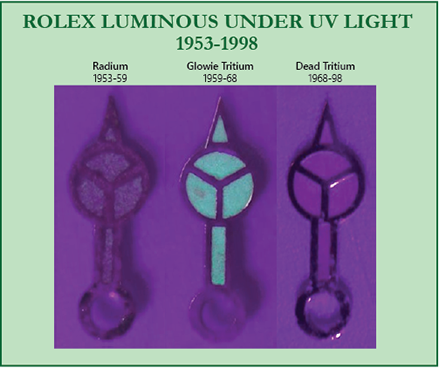 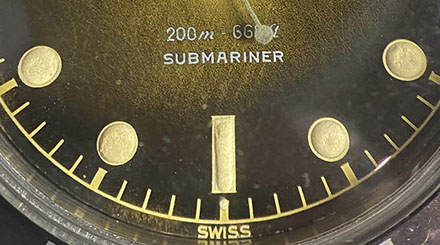 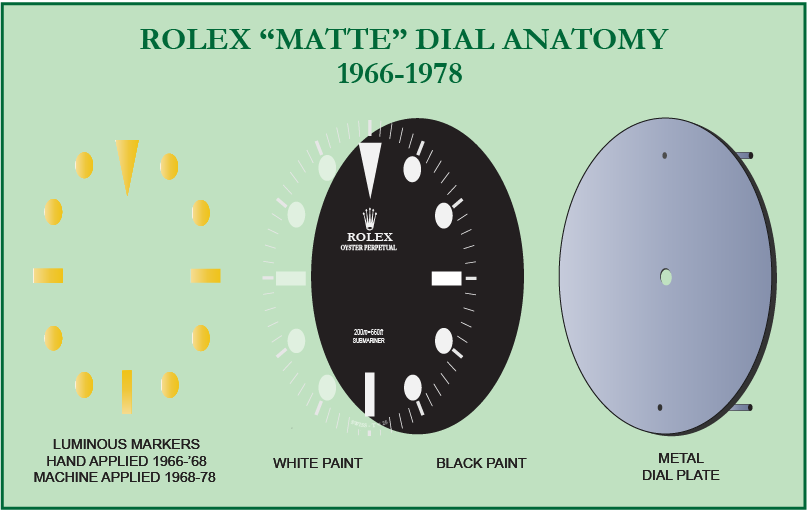 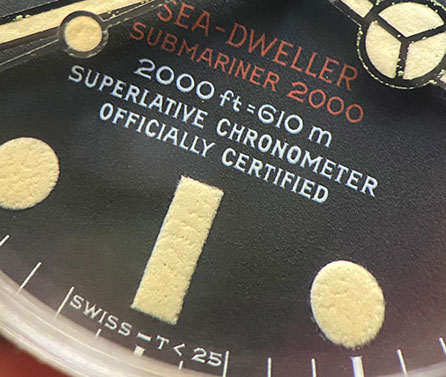